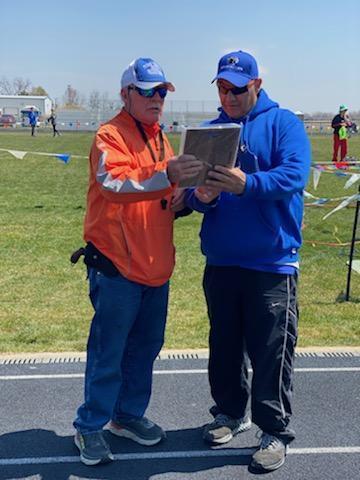 Hershey Public Schools honored Mike Troxel this past Saturday at the Mike Troxel Track Invite. Mr. Troxel received a plaque for his dedication to Hershey students and his impact on track state wide.

Greg Welch, Hershey Public School’s AD presented Mike Troxel with a plaque for his life-time achievement and commitment to track and field. This was the last track meet that Mr.Troxel participated in as the starter of a track meet.  Mr. Troxel has been involved with track and field for over 45 years. He began coaching track in 1974 and has been involved in it as a coach or starter ever since. He was probably best known as a vault and high jump coach although he coached some great hurdlers also! He’s started Class D, C, and B districts but never wanted to start the state track meet because he would rather watch the kids compete! He had the privilege of coaching two state runner up boy’s teams and one state boy’s championship team. He is a great advocate for track and field and young people.  The plaque reads: Thank you for all you have done for the kids of Hershey.